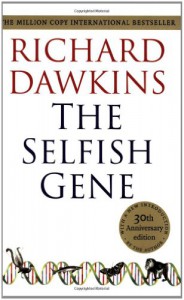 Perhaps the best use of the audiobook medium I've heard for non-fiction, with Dawkins and the narrator switching back and forth to indicate quotes and footnotes.

The central motif is the evolutionarily stable strategy (ESS), which Dawkins explains and explores throughout. It reminded me very much of the only perpetual SimLife scenario I was ever able to construct, which included only wolves and sea turtles but ran indefinitely.

Some sections seemed oversimplified; there is what seems like an over-reliance on game theory modeling, which is highly stripped of other variables and makes some assumptions that seem to conflate money with procreation as a reductive explanation of all evolutionary behaviors. These may be useful preliminary models, but seem lacking in real explanatory power.

I'd have liked to hear Dawkins's thoughts about left handedness and homosexual/bisexual behavior, both of which are present in animals as well as humans, and persist over the history of species.